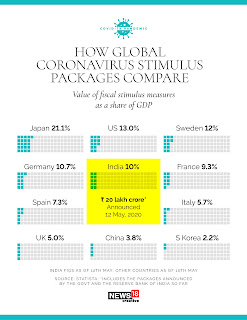 We are all excited about the 200,000,00,000,000 package announced by Prime Minister Modi and are trying to find its possible and plausible impact on our lives. If we try to do the math the figure comes out of be roughly 10% of our Gross domestic product (GDP). It would be very interesting to know what it comprises of or what things contribute, who contributes to it and where do we stand. Sector Contribution Primary 16.00% Secondary 29.00% Tertiary 55.00% To simplify Primary is Agriculture based and allied business, Secondary is Manufacturing and tertiary  is the Service sector. Stock markets initially rallied from the bottom created by end of March almost falling 38 % from the peak and by April we saw almost an unreal rally which recouped almost half of the lost ground and now the stimulus package is here markets response to stimuli was that of a shock. I had to recount the number of zeros, still unsure if
4 comments
Read more

Gaurav Shah
The Blogger is a graduate in Instrumentation Engineering from The University of Mumbai and has done his Master's in Business Management from the Prestigious ICFAI Business School,Hyderabad.